Skip to content
Realme C12 was launched in August 2020. This phone comes with a 6.5-inch display with a resolution of 720 by 1560. It is powered by an octa-core MediaTek Helio G35 processor and has 3GB of RAM and 32GB onboard storage. The C12 runs Android 10, realme UI 1.0, and is powered by a 6000mAh battery. Buy this phone today from Gadgets Leo at the best price in Kenya and we will strive to deliver within 2 hours. Payment is on delivery in Nairobi.
Filter

Most phone brands with presence in Kenya want a share of the budget segment in the country. Realme is a fairly new entrant in the local market that seems to be working hard to capture the hearts of the budget shoppers in Kenya. One of their latest budget devices is the Realme C12. This phone succeeds the Realme C11 and comes with a good number of attractive features. It will no doubt compete effectively with similar phones from other popular brands scrambling for the affordable phones in the market such as Redmi, Infinix and Tecno. The price of this phone in Kenya is only KSh15,000.

Realme C12 houses a 6,000mAh. This is one of its key selling points. Before its launch in Kenya, we had only seen such a big battery only in Samsung M series phones such as the Galaxy M31s and M31. According to the manufacture, this phone can give up to 46 hours of talk-time, up to 60 hours on Spotify, 10 hours of playing PUBG. It can also offer up to 24 hours of Instagram or 28 continuous watching on YouTube.

In addition to the high capacity, the company also added “Super Power Saving Mode” which further helps to extend its remarkable battery life. The company claims that you can play YouTube videos for 2 hours on the C12 at 5 percent battery. Unfortunately, this device does not support fast charging. It comes with a 10W charger.

In the camera department, it is always advisable your expectations in check when you are buying a budget smartphone. It borrows a few things from its predecessor, the C11, but comes with an extra lens lens. The main camera on the C12 is 13 megapixels with an f/2.2 aperture. It is accompanied by a B&W sensor whose resolution is not specified. The other lens is a macro lens with 4cm focal length. This camera will give you decent quality pictures and videos in ample lighting. It has Chroma boost feature that helps to improve saturation levels to make your photos appear more natural.  The rear camera also has 4X zoom capability.

In addition, this device features a dedicated Night Mode. This is something that is not common in devices in this price bracket.

Budget devices don’t prioritize performance. That is why it is very challenging to find a phone below 10000 with great performance. This is because most affordable devices are usually equipped with mediocre processors and low RAM. The Realme C12 is equipped with MediaTek Helio G35 SoC just like its predecessor, the C11. It has a 3GB of RAM and 32GB onboard storage. Storage can be expanded via a microSD card up to 256GB. Around 10GB of the 32GB onboard storage space is taken up by the Android OS and pre-installed apps.

This phone’s performance can be described as average. You should expect all the basic apps such as Instagram, Facebook, Play Store etc. to run smoothly. It comes with a fingerprint sensor, a feature  that was missing from its predecessor. It supports 4G networks in Kenya.

On the software front, it runs Android 10 OS with Realme UI on top. This is the same skin that powers the mid-range Realme phones like the Realme 7i. Although the UI is clean and responsive, it has some bloatware, some that the user can’t uninstalled.

The design of the C12 basic, just what you would expect from a low budget phone. The materials used do match the price. Realme C12’s unibody plastic design and textured matte back finish makes it more attractive than most phones in its price range. There are two diagonal lines at the back. Realme calls the back design “Geometric Gradient”. This phone has two color options – Power Blue and Power Black. This device is slightly on the heavy side, something that is expected due to its mammoth 6,000mAh battery.

The triple rear camera is in a square-shaped housing. The arrangement of the lenses and flash is almost same with that of the Realme C11. It also comes with fingerprint sensor, a feature that was missing from the C11 and Realme branding at the bottom. As far as ports are concerned, this phone features the a 3.5mm headphone jack, a micro-USB port and a speaker grille. Its dual-SIM + microSD slot is on the left side.

According to the company, this phone has 88 percent screen-to-body ratio. It has a waterdrop notch that helps to maximize screen area. The display is 6.5-inch and has HD+ (720 x 1,600) resolution. 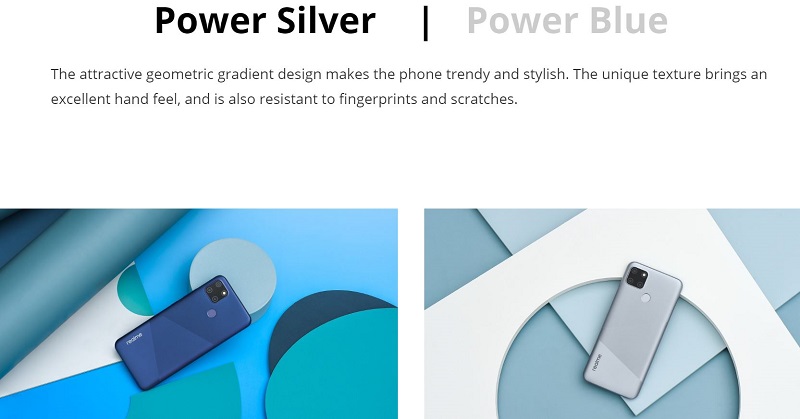 Other Realme Phones In Stock