Samsung Galaxy A40 Review - The Best Budget Samsung Phone Yet

While Samsung is a world leader in high-end phones, the company knows very well that it cannot depend entirely on high-end phones to maintain its top position as the world’s largest phone manufacturer. The launch of the Samsung Galaxy A40 was a move by the company to target the mid-range market, and it worked well. The A40 has many amazing features, including the Super AMOLED screen display and an ultra-wide-angle camera that many rival phones don’t have. It is a perfect phone for people looking for a high-quality affordable phone.

Samsung Galaxy A40 design and display

The Galaxy A40 features a 5.9-inch FHD AMOLED screen with 1080 by 2340 resolution. Super AMOLED screens are well known for its bright, punchy visuals. The aspect ratio is 19.5:9 and the pixel density is 437 PPI. The A40 features a 3D Glasstic back that is very attractive and durable. The A40 design looks relatively premium, which is a good thing for a budget phone. At the back of the phone, you will find an easy to reach the fingerprint scanner, which is fast and accurate. The volume and power keys are on the right side while the USB C port, single speaker and 3.5mm headphone jack are on the bottom side. This phone sits well on the hand, thanks to its all-rounded sides. Its notch is not that attention-grabbing. You will hardly notice that it exists. 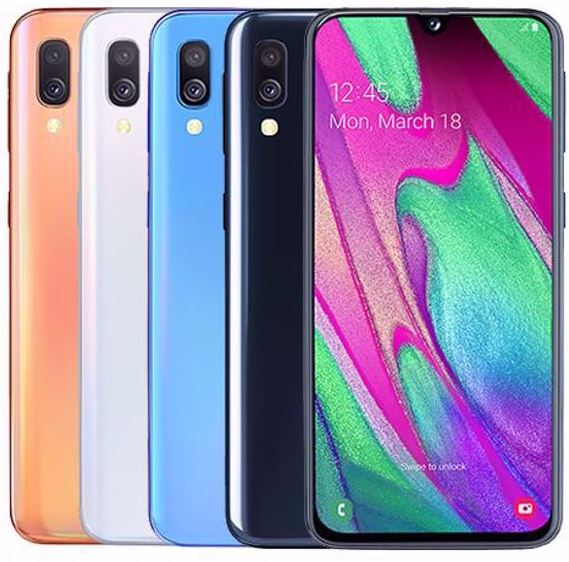 The A40 runs on the latest Samsung interface, the OneUI which has plenty of features. It is also easy to use. The OneUI is on-top of Android 9 Pie, which is the latest Android version. The A40 is powered by one of the most powerful mid-range chipsets ever used in Samsung phones, the Exynos 7904. The chipset accommodates an octa-core CPU with a high-performance Cortex A73 cores clocked at 1.77GHZ.  For graphic demanding tasks, the A40 relies on the Mali-G71 GPU. The powerful processor is supported by 4GB RAM and 64GB internal storage which can be expanded by the micro SD slot.

The A40 is armed with a dual camera that consists of a 16MP primary snapper with an f/1.7 aperture and a secondary ultra-wide-angle 5MP with an f/2.2 aperture. The dual-camera setup ensures that you take high quality, detailed pictures. An LED light that sits just below the primary provides illumination in low light areas for better image clarity. The selfie camera is armed with a 25MP snapper with an f/2.0 aperture. If you are a selfie person, then A40 is the ideal phone for you. The A40 is one of the few mid-range phones with a fantastic selfie camera.

Unlike the Samsung Galaxy A50, the A40’s battery is not its key selling point, but it is good enough for this phone. It features a 3100mAh battery that can last up to 8 hours if the phone is used for web browsing and watching videos. The battery is supported by a 15W fasting charger that can charge the battery in less than 1.5 hours. 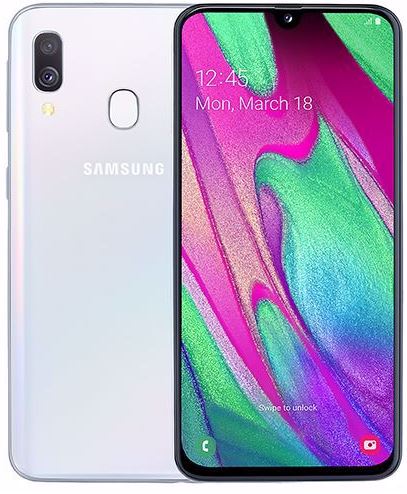 The A40 is indeed a great mid-range phone with plenty of amazing features. Its design and performance are also very impressive. We recommend for anyone looking for a powerful mid-range phone that can perform typical day to day tasks with any lags.