Dear Esteemed Customer,
Due to the recent Covid-19 Pandemic, we would like to encourage you to embrace our delivery service. This will help us protect each other and adhere to the social distancing directive. Payment is on delivery in Nairobi.
Note

Rated 5.00 out of 5 based on 1 customer rating
(1 customer review)
Availability:

Email when it's available

There is no doubt that the low and mid-range phone market is highly contested in Kenya. Over the years, brands like Tecno, Xiaomi, and Oppo have eaten a significant market share that was previously captured by Samsung. Capturing the high-end, mid, and low-end market at the same time has been a considerable challenge that Samsung has been struggling with for a while. However, the company seems to have a way to strike a balance. The launch of the A and M series which targets mid and low-end markets has shown why Samsung is a dominant player in this industry. The Samsung Galaxy M30 flaunts many amazing features that most phones within its price range don’t. From a huge screen to the triple camera and sleek design, the Galaxy M30 has many features that you would wish from a mid-range phone.

The M30 features a 6.39-inch super AMOLED panel with 2280 by 1080 pixels, 19.5:9 aspect ratio and 394 PPI.  The Super AMOLED display is a massive upgrade from the LCD used in M20. The front camera is housed in the U-shaped notch which is smaller than the V-shaped notch on the Galaxy M10 and the Galaxy M20. Like other M series smartphones, the M30 back and frame are made of all plastic, but Samsung has added a gradient finish to make it look stylish and attractive. The right side of the phone has the power button and the volume rocker. The very responsive finger scanner sits on the back. The nano sim cards and a dedicated MicroSD slot sits on the left side while the USB C type, the 3.5mm audio jack, and the speaker grille all sit on the bottom edge of the phone. The M30 has curved edges, which makes it feel comfortable to hold on hands. 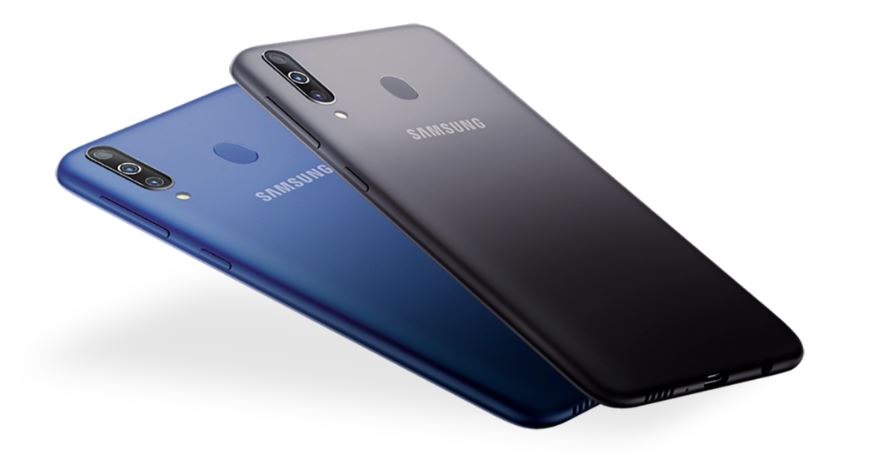 The M30 is powered by the Exynos 7904 chipset which is a combination of two high-performance Cortex A73 cores and six A53 energy-efficient cores. The high-performance cores perform all the hard tasks while the energy-efficient cores perform simple tasks. The memory comes in different variations including the 4GB RAM/64 GB storage and 6GB RAM/128GB storage. A dedicated microSD card can extend the storage up to 512GB. This phone is ideal for regular tasks like web browsing, call, and texting. However, if you love gaming, then the MaliG71MP2 GPU will disappoint you. However, that does not mean that this phone performance is terrible. Like the M10 and the M20, the M30 runs on the Samsung Experience 9.5 UI on Android 8.1 Oreo. This is quite a setback as most competing phones run the latest Android 9 Pie.

The camera hardware on the M30 is the same as one found on the M20. The only difference is that the M30 has an additional 5MP depth sensor. The dual camera features a 13MP primary sensor with an f/1.9 aperture, a 5MP secondary sensor with an ultra-wide camera and the 5MP depth sensor. The front-facing camera is equipped with a 16MP sensor, which is also quite impressive. The M30 is an ideal phone for individuals looking for a mid-range phone that takes quality pictures with excellent sharpness and attention to details.

The battery is one of the core selling points of the M30. It is powered by a 5000 mAh battery which is also the same as what powers the M20.  The M30 is equipped with a super AMOLED display, which is more energy-efficient. This means that the battery last even longer for M30. The battery can last for up to 15 hours of consistent web browsing. The battery is charged by a 15W fast charger that can refill the battery fully in 2 hours.

If you are searching for a high-performance phone with a great camera and excellent battery life, then the Samsung Galaxy M30 is an excellent choice for you. It is indeed a great phone that can handle your typical day to day tasks with ease.