Hidden Features of the Samsung Galaxy A20 You Don't Know About

12 Reasons to Buy the Samsung Galaxy A20

Samsung has been flooding the smartphone market over the last couple of months. The South Korean company launched several A series smartphones and sold over 2 million phones in the first 40 days. That is incredible! The Samsung Galaxy A20 smartphone is among the best-selling budget smartphones on the Kenyan market today. The A20 adopts some of the features found in high-end phones including a sleek design, Super AMOLED screen, powerful battery, and the new OneUI Samsung software. With the launch of the A20, Samsung has demonstrated that you can own a smartphone with fantastic performance, design, and screen quality without harming your pocket.

Samsung Galaxy A20 Design and display

The A20 features a huge 6.4 inch Super AMOLED screen with super slim bezels. The screen has an HD resolution which is okay considering its price. The AMOLED screen is sharp and offers superb contrast and brightness. The screen covers most of the part of the display with only a small chin on the bottom and a U-shaped notch casing on the top that houses the front-facing camera and the earpiece.  You can easily mistake the A20 with a flagship phone because of its fantastic design. It features a premium-looking Glasstic design that is extremely attractive and durable. This phone is sleek, classy, and extremely comfortable to hold and operate. 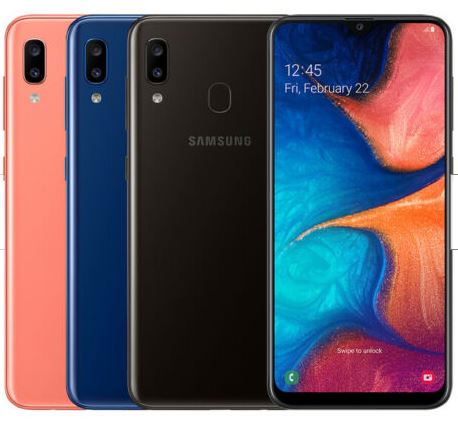 The A20 runs on the latest Samsung OneUI on Android 9 Pie. The new OneUI that the A20 runs on is the same as one that flagship smartphone like the Galaxy S10e uses. The new OneUI platform is simple and easy to use. It also equipped with amazing features that enhance user experience. The chipset is supported by 3GB RAM and has 32GB native storage that can be extended by the microSD slot. The fingerprint sensor located at the phones back and can detect your finger fast. The A20 is mainly meant for basic day to day use like browsing, calling, playing casual games, and watching videos. Game lovers will not be impressed with the performance of this phone.

The A50 features a dual back camera with a 13 MP primary sensor with f/1.9 aperture and a 5MP secondary camera with ultra-wide f/2.2 aperture that captures the depth of field, giving photos better clarity.  The quality of images that the A20 takes is not as good as the A50 and A80, but it is good enough for a mid-range phone. The front-facing camera features an 8MP sensor with an f/2,0 aperture that captures impressive photos, especially when taken during the day.

The A20 is powered by the 4000mAH non-removable battery. This battery can last for up to 13 hours when the phone is used continuously for browsing. This is impressive because most phones within its price range, including the Nokia 7.1 usually ran out of power in less than 7 hours. The battery is refilled by a 15W fast charger that can charge the battery in less than 2 hours.

Any budget phone has its pros and cons. And while we cannot promise you that you will get everything that you are looking for from the Galaxy A20, we guarantee you that 70% of this phone’s features will impress you.

Order this phone online from Gadgets Leo and we will deliver it fast. You can also pick up your purchase from our shop in Nairobi CBD.

Be the first to review “Samsung Galaxy A20” Cancel reply